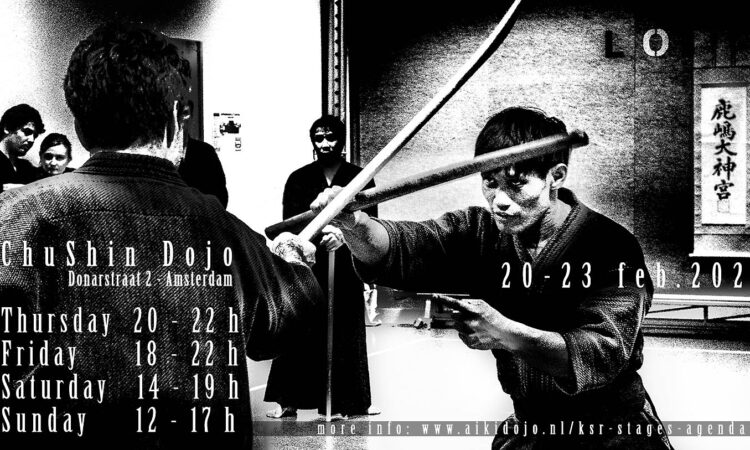 After the start of the first day with Alex Sensei, the dojo was filled with a mixture of expectation, excitement and relaxation. A lot of people showed up and the ChuShin dojo was quit full, especially on the Saturday. We thank Thomas / ChuShin for this very nice spot where we were able to train for 5 days. Marie Jamain from France joined us with some of her pupils and also we were happy to welcome KSR The Hague, Bart from Haarlem with his pupils and the KSR swordfighters from Antwerpen.

The amount of details Alex emphasized during the seminar was big and covered technical and philosophical issues; About having full control of your sword, about the Gedan kamai in between all kata’s that should have a full feeling of body-motion instead of just an arm-movement, but also the fact that if you train already for years and experience that rush when things get really smooth, fast and effective: “Don’t get addicted to that for too long and move-on; There really is a lot more to discover. “
Alex likes to combine his deep philosophical visions with jokes that we cannot repeat here, so I would say: Don’t miss his seminar next year !

Malte Stokhof Sensei encouraged us last seminar to work on the next generation swordfighters. When Erik Sensei sat on the side and watched Jody’s kata’s with Alex Sensei, he looked quite impressed and it became clear that we can expect a lot from them.

SaturdayNight@JackDish – This nice bar/restaurant let us order in advance and everybody enjoyed a splendid organised fiësta; Nice food & a very nice time – Domo !

Got Something To Say! Cancel reply